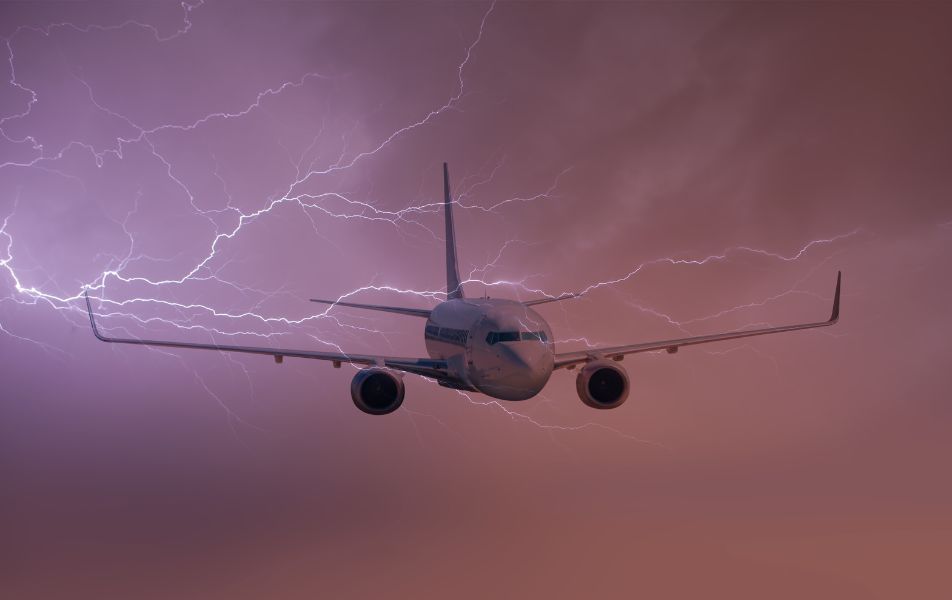 Whether it’s a commercial airliner or a private plane, all aircraft are susceptible to lightning strikes. Every 1,000 flight hours, odds are a single plane will be struck by lightning.

While the odds of a strike are relatively low, it’s still a real threat all pilots must take seriously. A direct strike can cause serious damage to an aircraft and could be worse for the passengers without the right precautions in place.

So, how do aircraft protect themselves and their passengers from these dangerous lightning strikes? Let’s take a look.

How The Aircraft Is Grounded

An aircraft’s first and most important way to protect itself from a lightning strike is by being properly grounded.

All metal surfaces on the aircraft’s exterior connect with copper cables that attach to special grounding rods driven deep into the ground, or frame.

When lightning hits the aircraft, it will travel through the metal surfaces and to the grounding rods. These rods safely dissipate the electrical charge and prevent it from damaging the plane or harming the passengers.

Another way an aircraft protects itself against lightning strikes is with special coatings and materials on the exterior surfaces.

For example, many new planes use composites instead of metal. They are less conductive than metal and provide extra protection against lightning strikes.

In addition, some aircraft get coated with a “lightning strike pacer.” This material helps to dissipate the electrical charge from a lightning strike so that it doesn’t cause too much damage to the aircraft.

Not only does this help protect the plane, but it also prevents any sparks or fires the strike could cause.

Another important way that pilots protect their aircraft from lightning strikes is by using lightning detection systems.

These systems use sensors to detect lightning strikes close to planes. The system will then alert the pilot so they can take evasive action if necessary.

Some of these systems can predict where a lightning strike will occur, allowing the pilot to take necessary precautions before the strike.

The system uses a sensor to detect lightning that reads the electromagnetic field around the aircraft. A nearby lightning strike disturbs the field, and the sensor sends a signal to the system that alerts the pilot of the impending strike.

How To Inspect an Aircraft for Damage

Even with all of these precautions, there is still a chance that an aircraft could get hit by lightning.

Pilots must know how to inspect their aircraft for damage after a strike. The first thing they will do is check the plane’s exterior for any damage. This check includes looking for any scorch marks, burns, or holes in the aircraft.

Next, they will check all the electrical systems to ensure they work properly. These systems include things like the navigation system, radios, and landing lights. Finally, the pilot will check the engine to ensure it is functioning properly.

If there is any damage to the aircraft, it’s important to have it repaired by a qualified mechanic before taking it off again.

How To Repair an Aircraft Damaged by Lightning

Repairing an aircraft hit by lightning is a complicated and expensive process. The first step is assessing the damage. This assessment can be difficult because the damage may not be immediately apparent.

Once the team assesses the aircraft, the next step is to repair any structural damage. This may involve replacing defective parts or using special techniques to repair certain areas. The final step is to test the restored aircraft to ensure it is safe to fly.

Tests may include ground tests, flight tests, and even computer simulations. They help to ensure the aircraft is safe to fly and that the repairs are correct.

While it can be costly and time-consuming, repairing an aircraft totaled by lightning is necessary to ensure the safety of the plane and its passengers.

Pilots can do a few things to help prevent their aircraft from being struck by lightning.

The first tip is to avoid flying in areas with a lot of lightning activity, including near thunderstorms, hurricanes, and other severe weather conditions. Flying through these areas is a surefire way to get struck by lightning.

If it’s not possible to avoid these areas, then it’s important to take extra precautions. These steps include being aware of the latest weather conditions and communicating closely with air traffic control. An emergency plan is the key to staying safe when flying near dangerous areas. This plan may include diverted airports and alternate routes.

If you can’t fly at a high altitude, it’s important to know where lightning is most likely to strike, like open areas, tall buildings, and bodies of water.

Lightning is attracted to moisture, and flying over a body of water increases the chances of a lightning strike.

Sometimes, flying over bodies of water is unavoidable. Be sure to keep an eye on the weather conditions and have a plan in case of an emergency.

Most newer aircraft have this system. If you’re flying an older plane, then you can install a lightning protection system.

Lightning protection systems are not foolproof, but they can reduce the risk of being struck by lightning.

Lightning strikes are a serious threat to aircraft. However, airplanes protect against most strikes using methods and safety features to keep passengers safe. Pilots can avoid lightning strikes by evading areas known for severe weather conditions and flying at higher altitudes when possible.

Learning about how aircraft protect themselves from lightning strikes can help to keep you safe the next time you fly.

Seattle Aviation Solutions can assist in keeping you safe on the next flight. Our aircraft parts and accessories can help improve your aircraft’s safety. Browse our selection today to find the right parts for your needs.

The Importance of Aviation Hydraulic Systems

What Are the Main Structural Components of an Aircraft?

No comments to show.